It is a tradition that all parishes where Salvatorian Fathers work, once a year financially support the vocations in the seminaries in Poland and Australia.

On this occasion we welcome FR GEORGE KOLODZIEJ SDS, Superior of the Salvatorians in Australia who will be our guest speaker at all Masses.

A special collection will be taken during Mass.  Special envelopes will be provided on all pews.

On behalf of all Salvatorian Fathers and Seminarians we thank you for your generosity.

May God bless you abundantly. 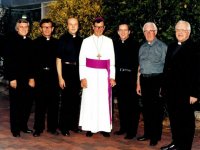 The history of the Salvatorians in Australia began in 1961. A few years earlier the Archbishop of Perth, Redmond Prendiville, sent a letter of invitation to the head of our Society in Rome, Fr Bonaventura Schweizer. Replying to the invitation Fr Schweizer sent the first Savatorian, Fr Paul Keyte to Australia in 1961. Fr Paul was asked to take pastoral care of the new parish of Bellevue. The beginnings were difficult. The parish community life centered around the local catholic school, as there was no church, and no parish house or office facilities. In the following years a few more Salvatorians from the British Province joined Fr Paul.

In 1966 the new St Anthony’s Church, together with the accommodation for priests and the parish centre were opened in Bellevue. The parish of St Anthony was the only Salvatorian centre in Australia until the year 1982, when Fr Aloysius McDonagh became the Parish Priest of Esperance, in the diocese of Bunbury. In the late 70’s, prompted by the shortage in numbers, the British Province of the Salvatorians seriously considered passing on their ministry in Australia to the vibrant Polish Province.